When considering ways which an animal or bird can access the interior of your home, the chimney is a logical place to start. The structure is essentially a large passageway which extends from the warm interior of your home to the cold outside world. This protected shaft offers a safe haven for animals to build nests and a quiet place for them to retreat from the weather.

However, animals nesting in your chimney is problematic - both for you and for them.

Many homeowners believe that the best way to get an animal or bird out of the chimney is to light a fire and "smoke them out." However, this is never a recommended way to deal with the intrusion, for several reasons.

In regards to the animal, the fire or smoke can kill them and any babies in their nest. Not only is this inhumane, but then you are likely still left with dead animals in your chimney which require removal anyway. Building a fire may also threaten the health and safety of your family. The presence of the animal or nest may block the chimney, preventing smoke, soot, and carbon monoxide from escaping the home as designed and creating a fire hazard.

Identifying Sounds from the Chimney

Very often, strange sounds from your attic, walls, or the chimney are the first indication that an animal is present. Different animals will make different sounds. Sounds will also vary based upon if the animal is nesting happily, or has gotten stuck in a narrow portion of the shaft. Here are some noises you may hear if an animal or bird has made its way into your chimney.

Birds will often build nests in the chimney to keep babies safe from predators, especially when the mother bird is away from the nest. While the birds may have nested at the top of the chimney or in the vent, you should investigate to ensure that they are not in the interior of the shaft. It is also common for an entire colony of birds to decide to move in, and multiple nests could be scattered throughout the chimney shaft. Birds can also become disoriented and fly downward, escaping into your home via the fireplace.

Small animals such as mice, rats, and squirrels will also build nests in the chimney. Occasionally, even a larger mammal like a raccoon may decide to take up residence. You may hear scratching as they go about their daily routine, but frantic scratching may indicate that they are trapped. As the inside of a chimney shaft is typically slippery, animals may find that they can quickly descend into the chimney but cannot easily get back out.

Bats emit distinctive sounds which can differentiate them from birds. You may hear high-pitched cheeps from the bat. Their rapid wing movement (much faster than that of birds) will also sound more like whirring than flapping.

Should You Investigate Those Strange Sounds?

Very often, it will be impossible for a homeowner to determine what is causing the scrapes, scratches, and thumps coming from the chimney. A trained wildlife control professional must be called immediately to remove the intruders safely. There are many inherent dangers involved in entering a small space with an unknown wild creature.

The Dangers of Removing Animals From Chimneys

Animals and birds in your chimney are a serious matter. You have probably heard that a cornered animal can become vicious. But when an untrained homeowner confronts an animal in a small space, especially if they are defending a nest - removing critters can quickly become exceptionally dangerous.

Bird nests which are constructed on top of the vents of gas fireplaces present a dangerous scenario. Nesting materials inside a gas vent may result in a potent fire hazard and may block carbon monoxide from escaping your home, which can prove fatal.

Bats love dark, private spaces and chimneys fit the bill. However, bats are known to carry rabies, so homeowners should never attempt to remove bats themselves. Like birds, bats can escape through the fireplace into your home - a nightmare scenario for many. An expertly trained wildlife removal expert should always be tasked with their removal.

When squirrels build nests inside chimneys, it presents a particularly tricky issue to resolve. These rodents build compacted, tight nests which may not only block the majority of the shaft but are labor-intensive to remove. Again, if the flue cannot vent because of a large squirrel nest, a fire hazard is created.

What to Do If You Hear Sounds From Your Chimney

First and foremost, do not start any fires or attempt to smoke the animal out. Instead, close the flue to prevent animals or birds from descending into your fireplace, and then listen carefully to the noises. Providing as many details as possible will be beneficial to the wildlife control expert who will be determining the nature of the issue. You will want to take note of the type of noises you hear, such as chirping or fluttering, whirring, or scratching. Record of the time of day that the noises occur, and if it sounds as if there are multiple animals. Are the sounds becoming increasingly frantic? The animal may be trapped as opposed to nesting.

You may also be able to determine which animals or birds are in your chimney by viewing their activity from the outside. You may notice birds flying through vents, or a raccoon walking across your roof towards the chimney structure.

Armadillo Wildlife has two decades of experience in identifying, trapping and excluding pests of all kinds, making us Fort Wayne's trusted wildlife control experts. We will not only identify and remove any rodents or birds from your chimney, but we will then perform any necessary exclusion repairs. These may include completely clearing and cleaning the chimney, as well as installing a chimney cap on your roof to keep most critters out. Never attempt to remove animals from your chimney without a licensed professional onsite. Call us today. 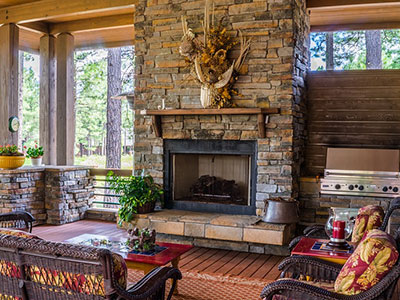