Groundhogs are large, ground-dwelling rodents which grow to nearly two feet long, and are typically between ten and twelve pounds. Also known as woodchucks, groundhogs are identified by their round body, flat head, brown fur, and a small bushy tail. They have sturdy legs with curved claws which help them to burrow. But their most qualifying characteristic is the two long, continually growing incisor teeth which make them prolific diggers.  In fact, they  spend the majority of their life underground in complex tunnels called burrows, which they dig in dry, well-drained soil. They prefer areas with nearby cover, including structures, home foundations or trees. Groundhogs move around the most during the early morning and early evening hours, which is when they emerge to forage for food.

Groundhogs only produce one litter per year. Young are generally born in the late March to early April time frame, after only a 32 day gestation period. A litter can consist of 2 to 10 babies. Once grown, a groundhog can live up to 6 years in the wild.

Can They Really Forecast the Weather?‍

‍Although famous for their prognostication skills, no - groundhogs do not forecast the weather. The rodents enter deep sleep hibernation in October and don't poke their heads out again until early spring. This emergence from their burrow has given them their reputation for having the ability to predict the onset of the spring season.

It is easy to spot evidence of a groundhog on your property - they don't exactly hide. Groundhog burrows have openings which are approximately 10-12" in diameter, with piles of dirt or rocks around the entrance. Groundhog tracks can be seen in the soft soil surrounding their burrows. Rear footprints have five (5) toes, and the front feet have only four (4) toes – but all toes have very sharp claws which are visible on the footprint. Their trail will show a front paw track immediately followed by a rear paw track.

As vegetarians, groundhogs may well be the culprit munching on your vegetable garden. You can positively identify them, however, by one bizarre habit. For some reason, the groundhog will eat his way through your garden in a perfectly straight line.

The most efficient method for removing a groundhog from your property is trapping. Filling up their burrows without removing them will not work. Remember, they are diggers and will make their way out without too much effort.

Phase 1: Your Armadillo Wildlife control expert will always conduct a thorough investigation of your property before beginning any project. This inspection will allow us to confirm that you have groundhogs and understand the scope of the situation, as well as to identify points of access and entry.

Phase 2: Our team will present you with a comprehensive plan of action, detailing our process for getting rid of the groundhogs. Only after you agree to our assessments and recommendations do we begin.

Phase 3: Given the size of groundhogs and woodchucks, the removal specialist is likely to utilize a large, sturdy cage as a trap. The enclosure is baited and positioned within proximity to the entrance to the burrow.

Phase 4: Groundhogs are typically caught alive. Once removed from the property, we will collapse and fill in their tunnels and burrows and remove the mounds surrounding them.

Phase 5: Following the rodent's removal, we will perform any necessary exclusion repairs - such as sealing off open areas under structures. Depending on the terrain, we may also install a steel barrier around the perimeter of the structure. This barrier will help to prevent the groundhogs from finding another way to burrow underneath the home. It is buried at least a 3” underground, with the bottom of the steel fence curving outward and away from your house. A one-way exclusion door may also be installed to allow any critter trapped under your home the ability to exit while simultaneously barring them from re-entry.

Phase 6: Our wildlife control expert will do a final inspection of the property to make sure that all evidence of groundhogs has been removed. He will also verify that all exclusion repairs have been performed satisfactorily.

What Kind of Damage Can a Groundhog Cause?

Groundhogs are considered more of a nuisance than a threat. They will most often live under a shed or porch and will do a lot of digging and burrowing. They enjoy being under the structures tangential to your home, such as decks or patios. As dirt is removed or relocated by their digging, foundations may sag or crack. Although they have impressive teeth and like to gnaw, the habit doesn't cause an issue with humans.

Groundhogs are herbivores with voracious appetites, consuming 1/3 of their weight each day. Favorite foods include apples, clover, dandelions, flowers, bark, carrot tops, and beans and peas. They will harvest your entire vegetable garden, and then head over to the flower bed to continue their feast. As autumn approaches, the groundhog will eat more aggressively to maximize fat stores to get through their winter hibernation.

Because of their systematic and insistent digging, you should get rid of groundhogs as soon as you see evidence of them on your property. For more expert information about groundhogs, groundhog trapping and groundhog exclusion, call the professionals at Armadillo Wildlife of Fort Wayne. 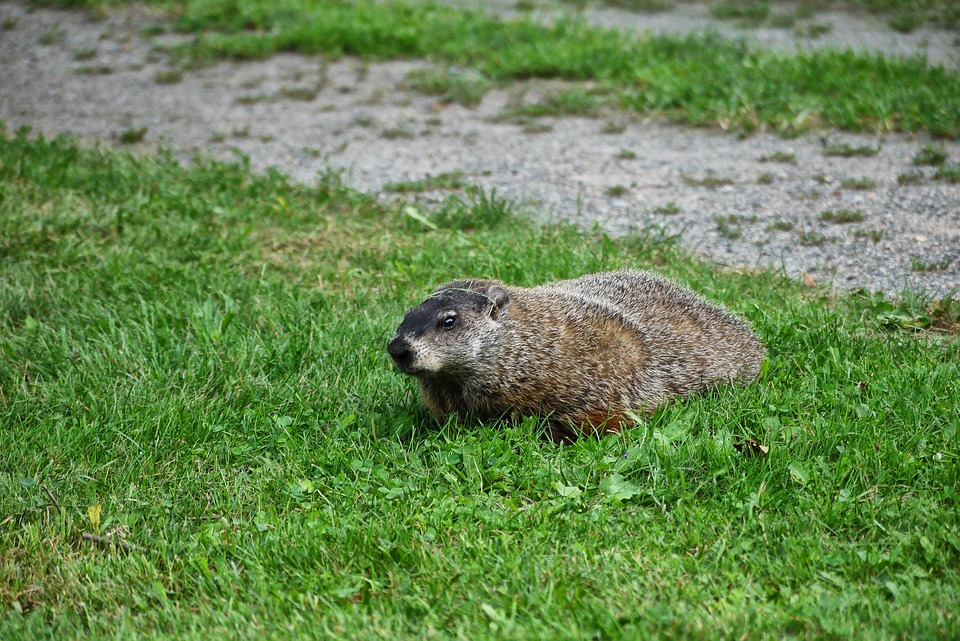