Mole Control Moles are rarely seen by humans, as they live primarily underground and surface only occasionally. Moles prefer to dig in moist, sandy loam soils, building an extensive network of burrows. During most of the year, they keep busy constructing shallow surface tunnels. Deeper, more permanent tunnels will be dug to protect their nests during the winter months. Moles breed from the late winter into spring. After a gestation period of between four to six weeks, the female will birth a single litter somewhere between March and May. Litters can contain up to 5 hairless babies, who, although quite helpless, at birth, will leave the nest in as soon as four weeks.

Moles rely on their sharpest senses - smell and touch - to find the worms and insect larva on which they feed. Moles will consume as much as 80% of their body weight every day. The massive amount of food helps them to keep up with their activity levels. They prefer to eat earthworms and white grubs, although mature insects and spiders are also on their menu. ‍

How to Identify a Mole

‍Because moles live most of their lives underground, they have small eyes and poor eyesight. Moles exhibit short necks and elongated heads, and their legs are quite strong from constant digging. The easiest way to distinguish a mole from a vole, shrew, or mouse is by its enormous, paddle-like feet and huge toenails. The mole's fur is unique. It offers no resistance, no matter which direction the animal is moving. This adaptation allows the mole to move forward and backward within its tunnels with ease. The mole has no ears, and because of how tiny their eyes are, may appear to have none.

Evidence of Mole Damage in Your Yard

‍Despite being a relatively small animal, only ranging between 4-6 inches in length, the humble mole can do a lot of damage to your property, lawn, and landscaping. Moles are capable of creating tunnels at the astonishing rate of 15 feet per hour, utilizing large front claws to handle the excavation. Those claws, along with cylindrical bodies and velvety fur allows them to move quickly and easily through the dirt. Small but mighty, these animals burrow mere inches below the surface of your property, looking for grubs, worms or other insects on which to dine. The burrowing will result in a series of raised ridges in the yard. Often a mound of dirt will be a telltale sign of a deep tunnel where moles have dug down even further. You may not even realize that you are dealing with a mole infestation until you notice the ridges.

These animals are not dangerous or aggressive but can ruin the aesthetics of your property and can become a homeowners nightmare. Although moles are carnivores and do not eat plants, their burrowing activities can destroy your vegetation and landscaping. They can also do severe damage to the root systems of your flowers and plants. Because moles love to feast on earthworms, they can rob your other plants of the many benefits earthworms provide for healthy soil and roots.

‍In our line of business, Armadillo Wildlife can generally rely on live cage trapping to get rid of pests and unwanted intruders. However, because of the mole's habit of living underground, the trapping process is a bit more challenging and requires a different method.

‍Phase 1: Armadillo Wildlife begins each extraction and exclusion effort by performing a comprehensive inspection of your property. We will identify burrows and tunnels, and once we fully understand the problem. We will provide you with a thorough action plan which will outline our strategy for getting rid of the moles.

‍Phase 2: Once you fully understand our course of action, we will get to work trapping the moles. Traps are set at the entrance to each identified tunnel.

‍Phase 3: Once the moles are extracted, the tunnels will start to collapse and cut off the ventilation into the tunnels. This action makes the tunnels and burrows less hospitable to any newly arriving moles.

‍Phase 4: Armadillo Wildlife will perform a second inspection before we close your extraction project. This inspection will ensure than tunnels are sealed off and collapsed, rendering them useless to opportunistic animals.

After We Leave - Additional Exclusion Methods

‍Although some do-it-yourself home remedies are floating around, there is no truly effective way to repel moles from your property. If you have a mole infestation, it is necessary to trap and remove them to deal with the problem. However, once the moles are gone, there are several ways which you can prepare your yard to make it unattractive to new moles.

It may help to maintain a low grass height and harden your soil to discourage digging. As moles prefer overgrown areas and moist and loose dirt, these two methods may encourage them to find a more palatable habitat.

If you have an evident mole problem on your property, there is no time to waste. Moles move quickly and can damage your lawn at a remarkable pace. Therefore, it is necessary to call in assistance as soon as you notice the ridges and molehills. For more expert information about moles, mole trapping and mole exclusion, call on the professionals at Armadillo Wildlife. 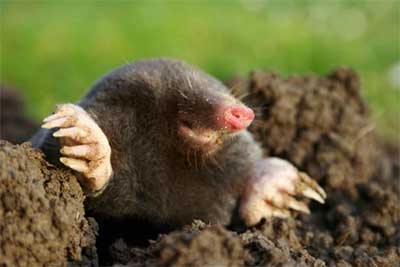